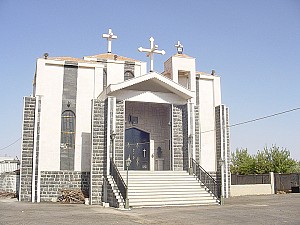 Saint Luke offers Sunday School classes for adults and children during the academic year.  We often send a few children to Camp Saint Raphael during the summer. Though we are a small parish, we also collect offerings to help people in need during Advent and at other times.  One such effort is the Sister Diocese Program between the Archdiocese of Bosra-Hauran (Syria) and our Diocese of Wichita and Mid-America.  The Orthodox Christians who today live in much of the territory once known as Arabia Petraea – descendants of those converted to faith in Christ Jesus by St. Timon – comprise the faithful of the Archdiocese of Bosra, Hauran, Jabal al-Arab and the Golan. The present “angel of Bosra and successor to St. Timon” is Metropolitan Saba (Esper). One of the most venerable Archdioceses of our Patriarchate, the Archdiocese of Bosra now finds itself facing very difficult times. Due to the frequency of warfare in that area, the occupation of much of its territory by a neighboring unfriendly nation, and the resultant unemployment and poverty, most of its people are economic refugees, having relocated to Damascus or departed for the Americas, Australia, Europe or the Gulf States. In a gesture of Christian love and support for Metropolitan Saba and his flock, the Diocese of Wichita and Mid-America has committed itself to a “Sister Diocese” relationship with the Archdiocese of Bosra-Hauran.

Ephesians 2:14-22; Luke 18:18-27             As we prepare to welcome Christ at His Nativity, we must be on guard against the subtle temptation to make the season all about ourselves and our place in the world. That may seem like a strange temptat...

Hebrews 9:1-7; Luke 10:38-42; 11:27-28      Today we celebrate the feast of the Entrance into the Temple of the Most Holy Theotokos. Her elderly parents Joachim and Anna offered Mary to God by taking her to live in the Temple in Jerusalem as a you...