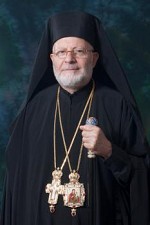 His Eminence, Metropolitan Joseph, was consecrated to the Holy Episcopacy on June 30, 1991 at St. Mary Cathedral in Damascus, after many years of serving as a deacon and priest. His Eminence was born in Damascus, Syria, in 1950. He completed his basic schooling at the St. John of Damascus and al-Assiyeh schools in Damascus and then at Our Lady of Balamand Monastery in Koura, Lebanon. He completed his undergraduate studies at the Lebanese University in Beirut and then earned his Master of Theology (M.Th.) with special studies in music and languages from Aristotle University in Thessaloniki, Greece. He was awarded an honorary Doctor of Divinity degree from St. Tikhon Orthodox Seminary in South Canaan, Pennsylvania in May, 2010.

With the blessing of Patriarch Elias IV of blessed memory, Metropolitan Panteleimon (Rodopoulos) ordained him to be a deacon on December 4, 1976 in Thessaloniki, Greece, and Patriarch Ignatius IV, of blessed memory, ordained him a priest on December 10, 1980 in Damascus, Syria. The priest Joseph served as dean of St. Mary Cathedral in Damascus and as overseer of Holy Cross Church and other parishes in the suburbs of Damascus. He served as superintendent of the secondary school in Damascus from 1980 until 1983. He then went abroad to pastor the Antiochian Orthodox Church in London, England, from 1983 to 1986 and the Antiochian Orthodox Church in Cyprus from 1986 until 1991, when he was elected to be a bishop.

Bishop Joseph was consecrated with the title, Bishop of Katana in Syria, and served as Patriarchal Assistant and Secretary of the Holy Synod of Antioch. In 1995, he was sent by Patriarch Ignatius to America. Here, in our Archdiocese, Bishop Joseph was assigned to the West Coast Chancery by Metropolitan Philip of blessed memory. Bishop Joseph was enthroned at St. Nicholas Cathedral in Los Angeles, California by Metropolitan Philip as the first Bishop of the Diocese of Los Angeles and the West on September 12, 2004.

On December 11, 2011, at the Church of the Dormition of the Theotokos in the Patriarchal Monastery of Our Lady of Balamand in Lebanon, Patriarch Ignatius IV elevated Bishop Joseph to the rank of Archbishop, in honor of his many years of service as a bishop both in our Archdiocese and in the Patriarchate of Antioch.

On July 3, 2014, Archbishop Joseph was elected to become the Archbishop of New York and Metropolitan of all North America by the Holy Synod of Antioch.

Metropolitan Joseph's achievements in apostolic ministry over the course of almost 20 years of diakonia as Bishop of the Diocese of Los Angeles & the West, as well as the locum tenens of the Diocese of Eagle River & the Northwest, form a solid testimony to his spiritual, ethical, and personal leadership qualifications. Over this vast expanse of the western United States and Canada, including Alaska, Metropolitan Joseph has tirelessly and unrelentingly maintained a personal apostolic presence in the more than 60 parishes under his care. His Eminence has maintained a personal culture of contact, by direct phone, with all his clergy. Many of the clergy and laity testify that Sayidna always remembers and acts on any important issue placed before him. This unique combination of traits, sobriety and blameless familiarity form the bedrock for his personal effectiveness with all.

Based upon his solid spiritual, ascetical, intellectual, and cultural formation and education, His Eminence has effectively established solid and meaningful Annual Clergy Seminars, and deepened the spiritual and educational experience of both clergy and laity at the annual Parish Life Conferences. He has brought in many and diverse Orthodox authors, leaders, and teachers to enrich the clergy and the laity of his two western dioceses. This has served to promote a strong sense of clergy brotherhood, inter-parochial exchanges, and has become the envy of other Orthodox jurisdictions everywhere. Guest speakers and visitors constantly remark that Metropolitan Joseph's clergy are outstanding in their consistent and active involvement in such events. His Eminence has labored intensely to deepen the spiritual life of his clergy, by encouraging frequent confession, personal prayer, continual education, and a heightened sense of the fullness of our Orthodox Christian tradition of interior and ascetical transfiguration in Christ.

His Eminence has demonstrated episcopal hospitality in his way of life and has led the way in cultivating an active pan-Orthodox community in the western United States and Canada. All of the canonical Orthodox hierarchs of the West relate to Metropolitan Joseph in a personal way as an episcopal concelebrant. This episcopal brotherhood has increasingly been reflected in the inter-parochial interaction of the priests and laity of all the parishes, across the western states and provinces.

Metropolitan Joseph has taken care in establishing a strong, clear, and straightforward liturgical guidance for all his parishes. He pioneered the use of the internet in publishing the entire text of all the Sunday and festal services of the Church throughout the year. His love for the divine services inspires him to improve the liturgical praxis of all the clergy, through constant interactions and special teachings. In addition, he constantly promotes the spiritual climate of the dioceses under his care with such things as "the thought of the day."

Sayidna Joseph is fluent in English, Arabic and Greek and is conversant in other European languages.

His name day is the second Sunday after Pascha (Joseph of Arimathea). 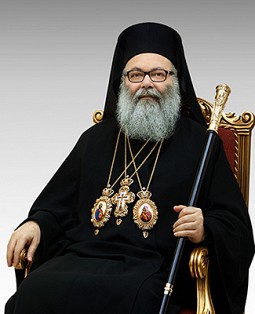 His Grace received his primary and secondary education in the public schools of Monessen, and in 1970 he received his B.A. in Psychology from California State University of Pennsylvania in California, PA. He entered St. Vladimir’s Orthodox Theological Seminary in Crestwood, NY in 1970, from which he received his M.Div. in 1973 and, in 2010, was awarded a D.D. honoris causa.

From 1973 until 1975 Bishop Basil served as pastoral assistant at St. George Church in Detroit, MI and from 1975 until 1986 he served as the first director of the Archdiocese’s Department of Youth Affairs with offices at the main chancery of the Antiochian Orthodox Christian Archdiocese of North America in Englewood, NJ. While working in that capacity, he served as instructor of Contemporary Byzantine Chant at St. Vladimir’s Seminary from 1980 until 1986; in 2010 the Seminary's Board of Trustees established the Bishop Basil Program in Byzantine Liturgical Music, a concentrated course of study in Byzantine chant. During 1986 and 1987 he resided at the St. John of Damascus Patriarchal Institute of Theology at the Balamand Monastery of the Dormition in the al-Koura region of north Lebanon where he studied, taught and did research and translations for The Liturgikon: The Book of Divine Services for the Priest and Deacon which was published by the Archdiocese’s Antakya Press in 1989 (reprinted in 1994 and 2010).

From July 1, 1987 until his consecration to the episcopacy in 1992, he served as priest at St. George Church in Wichita, KS. During his pastorate the new church temple was erected, consecrated and elevated to the status of Cathedral on April 21, 1991. He received monastic tonsure to the Lesser Schema at the Patriarchal Stavropegic Monastery of St. John the Baptist in Tolleshunt Knight by Maldon, Essex, England, during the night between January 19 and 20, 2003 by the monastery’s abbot, Archimandrite Kyrill. His Grace was nominated for bishop (Auxiliary to Metropolitan Philip) by the General Assembly of the Antiochian Orthodox Christian Archdiocese of North America on July 26, 1991, and was elected to the episcopacy (with the titular see of Enfeh al-Koura in north Lebanon) by the Holy Synod of the Greek Orthodox Patriarchate of the Great City-of-God Antioch and all the East on November 14, 1991. He was consecrated to the episcopacy on May 31, 1992 at St George Cathedral in Wichita, KS by Metropolitan Philip of the Archdiocese of North America, Metropolitan Elias (Audi) of the Archdiocese of Beirut, Bishop Antoun (Khouri) titular bishop of Seleucia and auxiliary of the Archdiocese of North America, and the late Archbishop Michael (Shaheen) of Toledo, OH, Auxiliary of the Archdiocese of North America. From 1992 until 1995 he resided at the Los Angeles Chancery, and in September 1995 he took up residence at the Wichita Chancery. By a decision of the Holy Synod of the Patriarchate dated October 9, 2003, His Grace became a diocesan bishop and, since his enthronement on December 15, 2004, bears the title of Bishop of Wichita and the Diocese of Mid-America.

Bishop Basil co-chaired the Joint OCA-Antiochian Canonization Commission which led to the glorification of Bishop Raphael (Hawaweeny) of Brooklyn on May 29, 2000. His Grace oversaw the publication of the book containing St. Raphael’s Vita, Akolouthia and Akathist (Antakya Press 2000), arranged the hymnography for St. Raphael to Byzantine melodies, and directed the Clergy Brotherhood Choir which recorded an audio CD of the hymns for the feast of St. Raphael (Antakya Press 2001). In November 2002 His Grace headed the delegation from the Archdiocese of North America which met in Geneva, Switzerland with the delegation from the Patriarchate of Antioch to reach agreement on the basic principles of Self-Rule for the Archdiocese of North America. In May 2010 he was elected Secretary of the Assembly of the Canonical Orthodox Bishops of North and Central America.

His Grace, The Right Reverend Bishop Basil, now resides at the Chancery of the Diocese of Wichita and Mid-America located at 1559 North Woodlawn Boulevard, Wichita, KS  67208-2429. The Diocesan Cathedral of St. George is located at 7515 East 13th Street at Broadmoor, Wichita, KS  67206-1223.

2 Corinthians 6:1-10; Luke 6:31-36   Today’s epistle reading begins with a very interesting statement: “Brethren, since we are fellow workers, we entreat you also not to receive the grace of God in vain.”  Right before this statement, St. Paul ref...

2 Corinthians 4:6-15; Luke 5:1-11            I suspect that many of the crises of our society today have at least something to do with people not having a profound sense of purpose for their lives.  Those made in God’s image and likeness will not ...

Galatians 2:16-20; Mark 8:34-9:1   As we continue to celebrate the Elevation of the Holy Cross, we must remember that taking up our own crosses requires a choice on our part each day of our lives.  We certainly cannot control whether we encounter ...

Galatians 6:11-18; John 3:13-17           The temptation to make faithfulness to Jesus Christ merely a matter of outward obedience to a set of laws goes back to the first century and is still with us today.  The problem with legalism is that, as a...