A few folks in Abilene discovered Orthodox Christianity and began praying and studying together in the late 1990s. Fr. Peter Jacobsen was sent to serve the fledgling Orthodox Christian community from 1998-2000. Fr. John Winfrey served the community from 2000-2003, during which time it received the name of St. Luke. After holding services in the chapel of McMurry University for five years, St. Luke moved into its own building in 2003. Fr. Michael Keiser, a missions priest for our Archdiocese, began visiting the parish that year in order to conduct services. Fr. Philip, who embraced Orthodoxy together with his family in 2000, was ordained as a deacon in 2004 and a priest in 2006, and serves as our pastor. St. Luke has introduced many residents of the Big Country to the Orthodox Christian faith, and its members do what they can to show the love of Christ to their neighbors. 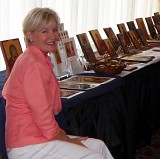 Linda is a graduate of Lamar University in Beaumont, Texas with a Bachelor of Fine Arts in Graphic Design.  She studied iconogaphy under Yuri Sidorenko and John Lickwar, becoming licensed by Metropolitan Philip.  She has written the Iconostatsis for St. Luke Antiocian Church in Abilene, Texas, as well as numerous private commissions.

We will take up a collection in support of our suffering brothers and sisters in Syria on July 24.  Below is information from His Grace, Bishop BASIL about this effort:

This year our annual "St Timon Sunday" will be Sunday, July 24th.  On that day we ask our congregations to highlight all aspects of our Sister Diocese project.  You can find suggested resources for your congregation’s observance of “St Timon Sunday” online atwww.antiochian.org/Hauran  Questions? Contact Deacon James Kallail (kkallail@att.net) of St Mary Church in Wichita, KS, coordinator of "The Hauran Connection."

A Message from Metropolitan Saba of Bosra-Hauran

"Dear Deacon James:  God bless you and all our brothers and sisters of the Diocese of Wichita and Mid-America.  There is nothing new to report except, as you know, the situation of the people is getting worse every day.  Rami, who was to be ordained, fled to Germany as a refugee accompanied by his wife.  Anas is to be ordained on Saturday, July 30th -- God willing.  I established a special charitable association at the beginning of 2012, but because of the situation its work until now has been off and on.  Now it is very active and can, by your help, work regularly. Its aim is to serve the needy parishioners of our Archdiocese and others who are in serious need.  Again I thank all our brothers and sisters of your Diocese, especially Sayyidna Basil.  I hope to visit DOWAMA, but I cannot know the time . It all depends on the situation -- and God's will.  In Christ, +Metropolitan Saba of Bosra-Hauran (bp.saba@yahoo.com)"

Pray for the clergy of the Archdiocese of Bosra-Hauran

Priest Philip (who serves Al Oslha, A dara, and Shahba).

Anas (to be ordained to the holy diaconate on July 30th)

Update on some of the parishes of Bosra-Hauran

Sweda: The city of our cathedral and chancery, now flooded with thousands of refugees including many from our parishes in outlying towns and villages of the region.

Daraa: half of this large parish fled to Damascus, 45 families of those remaining lost their homes.

Maarbeh: the entire parish has fled and now live as refugees.

Kharaba: still has 36 families while the others (160) fled to Sweda and Ira.

Jbeb: still has 18 elderly people who stayed so as not to lose their homes. The others fled to either Damascus or Sweda.

Al Oslha: has retained only half of the parish while the other half fled to Sweda.

The most intensive aid work of the Archdiocese is centered in both Sweda and Daraa.

PUBLIC WORSHIP IS CURRENTLY SUSPENDED DUE TO THE PUBLIC HEALTH CRISIS

Follow this link for prayers at home on Sunday

Hebrews 4:14-5:6; Mark 8:34-9:1             Today we venerate the precious and life-giving Cross upon which Jesus Christ offered Himself for the salvation of the world.  The God-Man conquered death by death through a public, torturous execution th...

Hebrews 1:10-2:3; Mark 2:1-12            Lent this year is not what any of us had anticipated.  Prudence about our own health and concern for the elderly and those with underlying conditions will lead to changes in our habits and routines.  Some o...